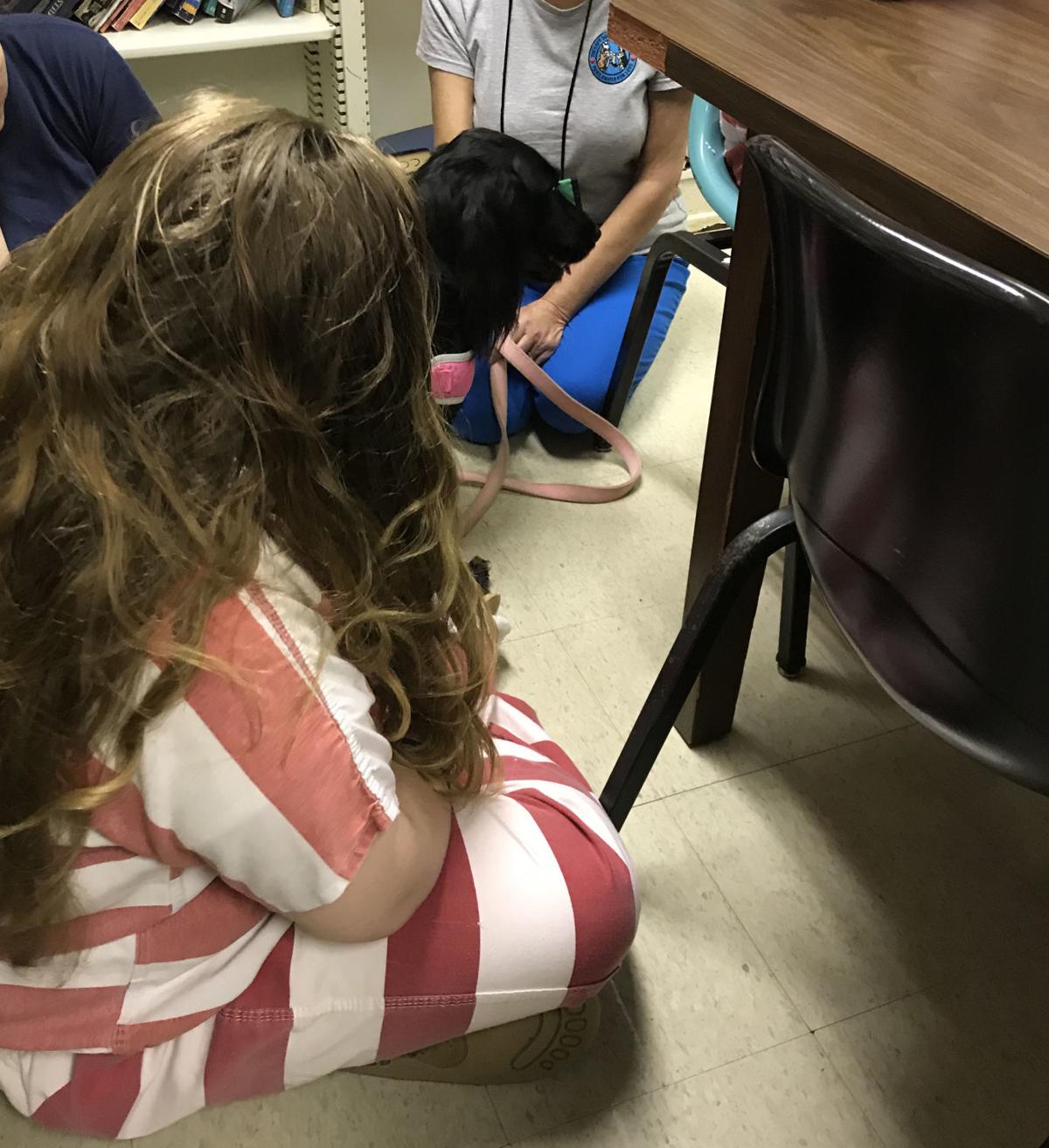 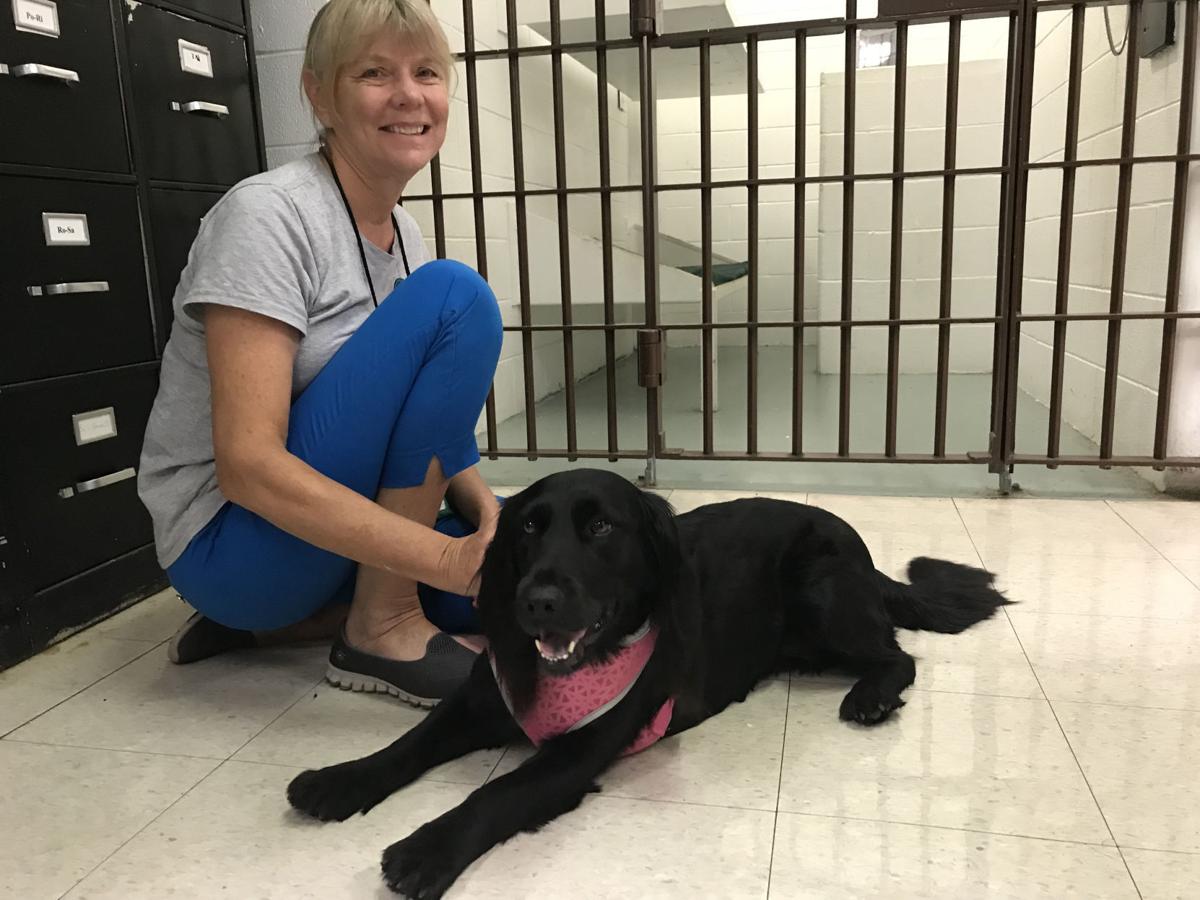 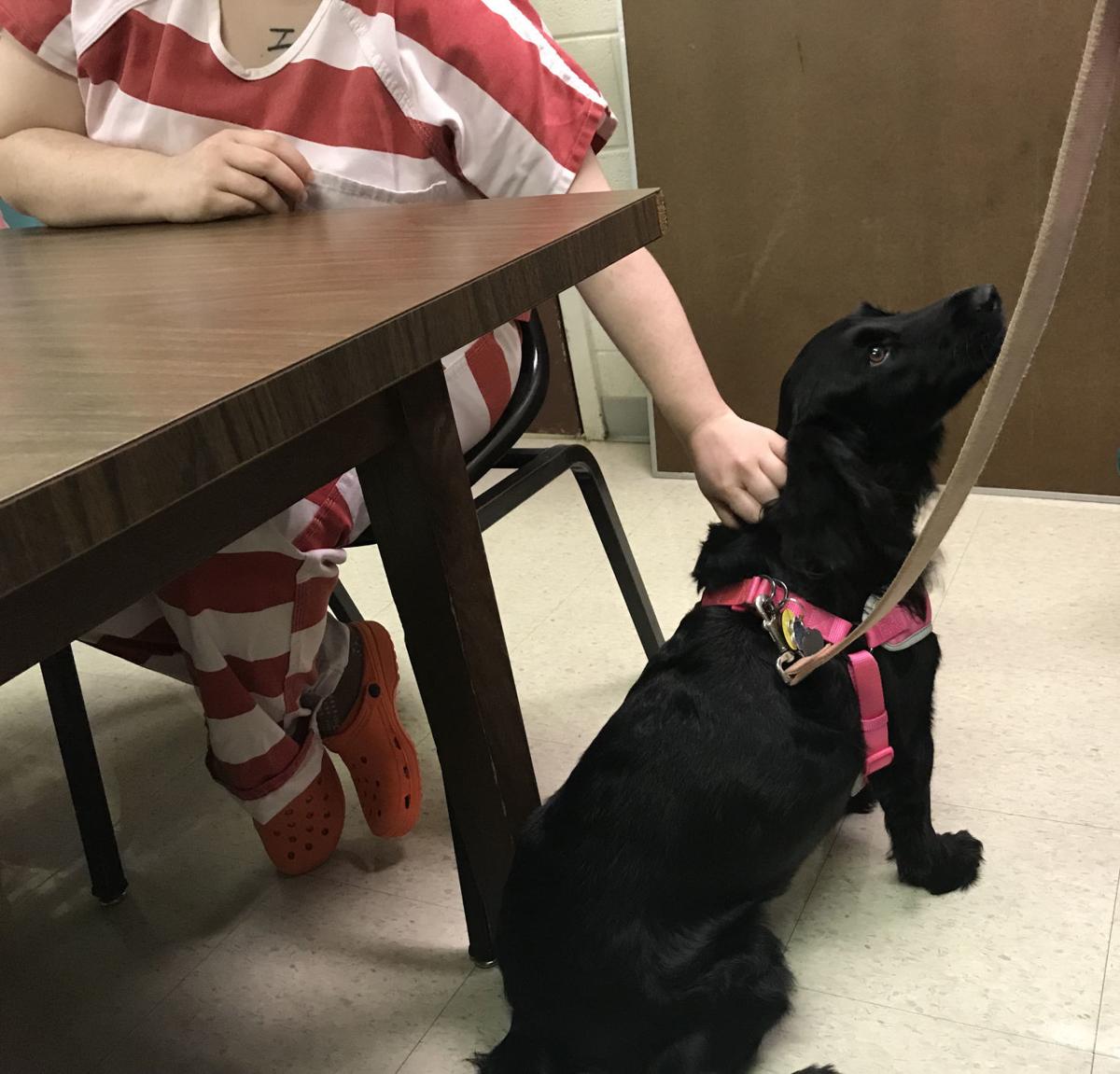 A program of Services to Abused Families, or SAFE, it invites women to meet weekly on Mondays with Justice System Advocate Margaret Kautz. She recently invited local media to sit on a session in the jail as part of outreach efforts in October, which is Domestic Violence Awareness Month.

Joining the group was Neska, a 6-year-old cocker spaniel lab mix certified through Therapy Dogs International, and her handler, Marie Murphy, a resident of the Boston, Va., area. It was their first time visiting the jail as part of the recently-expanded SAFE support group program that will include visits with therapy dogs once a month.

Murphy said when they rescued Neska, her personality seemed like a perfect fit for the working role in which dogs are specially trained to provide affection, love and comfort to those who need it. She enrolled the dog in obedience training through Culpeper County Parks & Recreation and learned about the therapy dog program and its local chapter.

“I thought it would be a wonderful thing to do,” Murphy said. “I enjoy it when people enjoy her.”

Kautz launched the weekly support group in the jail in April after having spent the past decade leading similar groups for other at-risk segments of the population.

“I thought maybe those who are less fortunate could benefit,” she said.

Many women who are incarcerated have been victims of domestic violence and sexual assault, Kautz said. “Some of them self-medicate with drugs,” she said.

During a recent support group meeting, one inmate was nodding off as she detoxed off a heroin dependency that got her put behind bars. In other cases, women are arrested for assault following domestic incidents, Kautz said.

On a recent Monday, a small elevator transported visitors to a small jail library where the support groups are held. Neska led the way, her tail wagging, eager to interact with four female inmates dressed in striped uniforms and orange Crocs. All of the women were young, in their 20s or 30s.

“Her job is to give kisses,” said Murphy. “She visits hospitals, schools, nursing homes and she is working. Most people like to pet dogs, it makes them feel better.”

One of the inmates immediately got on the floor with Neska and started to pet her as Kautz initiated a discussion about coping techniques.

“How does that feel to be under a lot of stress?” she asked. “We are coming up on a stressful time of year with the holidays. How do you deal with stress and anxiety that can lead to depression?” One of the inmates said animals release stress at her house. Another of the women looked down, her arms covered with apparent bruises, cut marks on her arms.

“I just got in here Friday,” said the same woman who answered last time. “Someone snitched on me for missing court.” She was the only one to reply to Kautz during most of the rest of the one-hour support group session.

Stress can make you sleep too much, not enough or not at all, said the SAFE advocate.

“How can we reduce stress?” Kautz asked. Replied the inmate, “Talk about it with somebody. Exercise.” Stressors can include being incarcerated, Kautz said, or a relationship ending. She encouraged the women to try to remain level-headed and to talk to somebody about it. “I know it can be difficult in your situation,” she said.

Neska can sense stress, offered Murphy. “She picks up on it when there is something emotional going on,” she said. “She is very perceptive." With that, the therapy dog got off the floor and stood next to the other inmates, their hands reaching out to pet her head. Other topics for discussion included having a narcissistic partner or one who uses “gas lighting” to exert control. Kautz explained the psychological term that originated from a 1930s film about a woman tricked into questioning her own sanity. Abusive partners can do the same thing through minimizing what they’ve done, denying the violence and blaming the victim, she said. A healthy relationship has trust, loyalty, communication and respect, Kautz said, asking what else constituted such. “They have to know how to cook,” joked the one inmate, smiling wide, turning her attention to Neska. “This dog is little and kind of cute, too. I am used to pit bulls.” Isolation from friends and family is another sign of an abusive relationship, Kautz said, as well as possessive behavior. “You are going to lose your identity. He is actually beating the spirit out of you,” she said, leading to feelings of desperation.

In some cases, the one inmate said, you get mad for a moment and then go right back with the abuser a few hours later. On average, it takes seven times before a woman leaves for good, Kautz said, noting abuse can be physical, verbal, emotional, psychological, financial and spiritual.

Power, control and intimidation are hallmarks of unhealthy relationships, she said. In some cases, an abuser will hurt their partner’s pet to hurt them. “You have to keep yourself safe and protected,” Kautz advised before ending the session and telling the women she would see them next week. Exiting through barred doors, Neska led the way out with her handler, lying down to rest for a moment.

Allison Brophy Champion can be reached at abrophy@starexponent.com or 540/825-4315.

Ex-wife of D.C. sniper to speak at domestic violence awareness event in Culpeper